FORE RIVER SHIPYARD - Founded in 1883 by Thomas Watson, 600 ships were built by 1989 when “The Yard” closed. From Dec. 7, 1941 until the end of the war, Fore River Shipyard built 92 naval vessels of 11 different types; the most notable types being the battleship, carrier, heavy and light cruisers, and destroyers for which the yard has been known. This great effort earned Fore River shipyard the highly prized Navy “E”. This honor was bestowed on May 15, 1942. Four stars were subsequently added.

MILITARY HISTORY RESEARCH CENTER AND WEAPONS COLLECTION - extensive archival material and a collection of military weapons from the Revolutionary War to present, including objects from foreign countries involved in military action with the United States. The center is available to visit and perform research on an appointment basis.

U.S. NAVY SEAL LTJG JOHN CONNORS - In 1989, Connors commanded a SEAL Team 4 platoon tasked with the seizure of Manuel Noriega's headquarters in Panama during Operation Just Cause. Connors took fire as he tried to rescue another SEAL unit that had been ambushed by Panamanian Defense Forces and was killed in the line of duty at age 25.

U.S. NAVY CRUISER SAILORS ASSOCIATION MEMORIAL ROOM - Artifacts, ephemera and memorabilia representing more than 100 cruisers. USNCSA is a membership organization that represents virtually all light, heavy, nuclear and guided missile cruisers that have served and are serving the fleet.

USS NEWPORT NEWS CA 148 "call sign" Thunder. Sister ship of Salem and the last and largest heavy cruiser built for the US Navy. She was the second ship in the Navy named after the city in Virginia. CA 148 served as Flag Ship for the 2nd & 6th fleets from 1949-1975. Collection includes artifacts, ephemera, ship’s bell, and video footage of operations at sea during the Cuban Missile Crisis and Vietnam War. Exhibit is maintained by the USS Newport News Museum and Memorial Foundation.

On October 1, 1972 Newport News suffered an explosion in her 8-inch gun turret B while engaged in naval gunfire support operations off Vietnam. The explosion heavily damaged the gun mount, killed 19 sailors and injured 10. The turret remained unrepaired for the rest of the cruiser's service life. In tribute to the Turret II Tragedy, the organization has restored and maintains Salem's gun turret B.

USS QUINCY CA 39 & CA 71 - Both built in the city for which they were named and served during World War II, CA 39 was sunk at Guadalcanal and CA 71 participated in the Battle of Normandy. Collection includes the CA 71 battle flag. 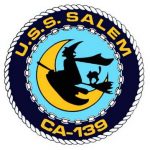 USS SALEM CA-139 - Famed 717-ft Flagship of the U.S. Navy's Sixth Fleet and "star" of The Finest Hours and The Graf Spee movies. Visit one of the ship's four engine rooms and sit in the captain's chair on the ship's bridge. Go below decks where over 1,600 officers and sailors lived and worked. Envision yourself part of the ship's company and visit the ship's store, barber shop, tailor shop, and cobbler shop. Imagine eating dinner in the crew's mess deck or having an ice cream sundae at the "Gee Dunk". Step inside one of three 8 inch gun turrets that once fired 260 pound shells almost 18 miles. As you venture further down in the ship you will enter the Combat Information Center (CIC) at the heart of the USS Salem. Amid the darkness you will think you are on the high seas and preparing for battle.

Class: German Seehund Midget Submarine
Bearing the number 075 and a German cross, this German sub was captured during World War II and is one of two still existing.
Length: 39 feet
Beam: 5 feet
Displacement: 15 tons
Complement: 2 men
Armament: Two 21-inch torpedoes mounted externally
Propulsion: One 60 hp diesel engine, one 25 hp electric motor; 6 knots
The Seehund (seal) was the most successful of several Nazi attempts to perfect a midget submarine. Operated by two men and carrying two underslung torpedoes, the Seehund was used very effectively in the waning months of World War II, sinking over 120,000 tons of allied shipping. Their small size and rapid evasive action made them virtually undetectable and depth charges seemed to bounce off of their resilient hulls. In the final months of the war, the Seehunds were used as "butter boats" to replenish the dwindling supplies of German garrisons stranded along the
coast.

Get Tickets Scroll to Top